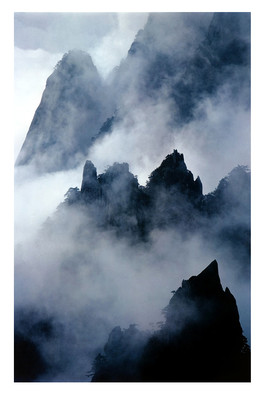 There are only seven prints in this exhibition, each 20 inches by 24 inches, each titled “Huang Shan” and taken in 1989. Marc Riboud (b. 1923) spent much of his career as a Magnum photographer in Asia, far from his native France. In 1957, he became one of the first Western photographers to have access to communist China, and he returned many times during the succeeding decades. Unlike the black-and-white images of Chinese life he is famous for, the pictures at Stephenson were taken in color and are dye transfer prints. Their subject, the Huang Shan mountains in eastern China, have for centuries inspired artists and poets, most notably Li Po. In Mr. Riboud’s photographs, as in the ink paintings of native artists, the jagged mountains rise through mist and clouds and seem to defy nature, solid-dark masses floating on seas of white vapor.

The use of color is very subtle, picking up hints of blue in the clouds and mere suggestions of green in the vegetation. In some images, the saw-toothed mountains appear in receding ranks separated by the swirling mists. In others, Mr. Riboud has trees or parts of trees in the foreground. In yet others, trees cling precariously to the sides of the mountains. Li Po wrote, “O mountains of renown that I adore….Let me be with the things I love, / And leave the world of man forever.”

Edward Steichen in the 1920s and 1930s: A Recent Acquisition

The 46 Edward Steichen prints on display on the first floor of the Whitney were a gift to the museum from Richard and Jackie Hollander, holders of one of the largest private collections of Steichen photographs. The pictures are a good sampling of the work Mr. Steichen was doing in the 1920s and ’30s, a very productive period for him. 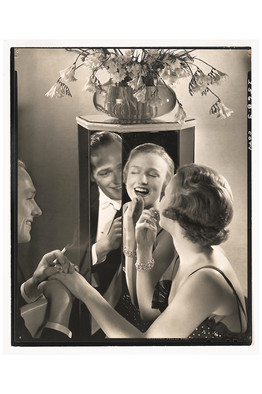 Mr. Steichen (1879-1973) was the chief photographer of Condé Nast publications from 1923 to 1937, and the exhibition includes several of the fashion photographs he took for Vogue and the celebrity portraits he took for Vogue and Vanity Fair. Celebrities include Eugene O’Neill, La Comtesse Jean de Polignac, Dolores Del Río, Walter Winchell, Gallant Fox (a horse), Mrs. Harry Payne Whitney, Winston Churchill, Paul Robeson, Mrs. James H. Van Allan, Beatrice Lillie, Lily Pons, Jacob Epstein, H.G. Wells, Maurice Chevalier and a self-portrait; a wide swath of stage and screen entertainers, literary figures, society types, artists, politicians and the horse. There are other portraits he took, including one of Mr. and Mrs. Carl Sandburg (his sister and brother-in-law), samples of his advertising work (NBC, Coty Lipstick, Cannon Towels) and still-lifes of fruit and flowers.

Steichen was a versatile and inventive artist, though some of his work now seems dated, even slick. The lighting of “Thomas Mann, New York” (1934), for instance, is overly dramatic, as is the lighting for “Charlie Chaplin” (1931). But many have held up well; “Marlene Dietrich” (1931), fresh from her triumph in “The Blue Angel,” is still ravishing.

Graciela Iturbide (b. 1942) is the inheritor of the aesthetic practices of her teacher, the great Mexican photographer Manuel Álvarez Bravo, and through him of the enduring traditions of her country’s art. This is a combination of modernism, surrealism, ethnography and a reverence for ritual and the borderline occult. The 34 black-and-white prints up at Throckmorton are mostly from Mexico, but include works from India, Madagascar, the U.S., Spain and Italy, all seen with the same inquiring, sensuous and discriminating eye. “Yucatán, Mexico” (1990) is ostensibly a landscape, a rock-strewn field with scrub in the distance, the foreground dominated by a weird growth: a substantial tree trunk that tapers rapidly a few feet up and bends to the right, with a few stunted branches and hardly any leaves. The style is straight, the light diffused from a hazy sky, and yet the image seems imbued with portent, as if botany is only where this picture begins.

About half the images involve people, but none are conventional portraits. In three of them the subjects wear masks, which are as important to understanding who they are as their faces would be. In “La Mixteca, México” (1982), a young woman seen from behind has the skinned carcass of a lamb draped around her neck. A woman in Madagascar is entirely wrapped in a plaid fabric except for her right foot. And in a self-portrait, Ms. Iturbide herself is half-hidden behind her Hasselblad.

—Mr. Meyers writes on photography for the Journal. See his work at williammeyersphotography.com