Like any good juried show, the Griffin exhibition is about variety and quality rather than uniformity or thematic purity. The 41 photographers with work in the show have one thing in common, says juror Kathy Ryan, director of photography for The New York Times Magazine: “faith in photography’s ability to tell stories.” Beyond the photographs being mostly color and mostly big, pretty much anything goes.

Sarah-Marie Land’s portraits of affluent children afford entree to a very different world from that captured in Mary Beth Meehan’s “Nana’s Kitchen.” With Meehan’s picture, the interest is less sociological or personal than formal: the play of patterns among the two samples of wallpaper and the woman’s vest, and the interplay between her face and those of the various people seen in an arrangement of family photographs. You want to talk about wallpaper, though, Emily Franklin’s “The Palmers” sure has some, and the way it clashes with a woman’s dress and the oilcloth on which she’s arranged a set of hand figurines (don’t ask) is really something. Speaking of patterns, why is that floral number in the image from Julie McCarthy’s series “The Last Great War” getting punched? It’s ugly, but not that ugly.

Those three pictures hang near each other. The Griffin’s Paula Tognarelli and Frances Jakubek have arranged the 59 photographs in the show to enhance visual interconnections. The single distant building in Bob Avakian’s marvelous George Inness-like landscape, “The Guard Shack,” is next to Paul Sisson’s “Home on the Range,” with its own solitary building. The feet in Nancy Grace Horton’s amusingly titled “Hot” (they’re on top of a stove) are alongside another pair of legs, in Margo Cooper’s “Through the Window.” The balconies in Stefanie Klavens’s “Beach Colony” echo those in Brian Kaplan’s “Sandcastle Resort” — and the pile of TVs (outdoors) in Kaplan’s photograph has an obvious affinity with the pile of TVs (indoors) in Samantha Vandeman’s “Floral Wallpaper.” And, yes, once again we have wallpaper. 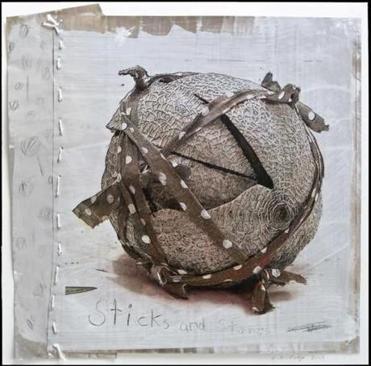 Some of the interconnections are with photographs not in the show. The children in Francis Crisafio’s two “Holdup in the Hood” pictures are distant kin to Helen Levitt’s masked kids. Christian Farnsworth’s “Returning Home; Abidjan to Conakry” startlingly updates Alfred Stieglitz’s “The Steerage.” Meg Griffiths’s “Miel y Sandia” recalls a breakfast Stephen Shore photographed in 1973.

Shore’s meal consisted of pancakes and half a cantaloupe. You can almost taste the multiple examples of that fruit in Kathleen Volp’s “The Melon Series” — but you sure wouldn’t want to. The 11 images at the Griffin are striking. They variously resemble planets, body parts, monsters, or fleshy geodes. The images are visually striking, not least of all because they’re so tactile. Volp cuts, binds, stitches, and otherwise prepares the fruit. They become a kind of soft sculpture.

Heidi Kirkpatrick’s “Specimens” is easy to miss. It’s displayed in a vitrine rather than on the walls. But that’s appropriate, since these various small images of people and body parts are themselves displayed within metal boxes. They recall 19th-century tintypes, but with a contemporary sensibility. Somehow the clash of chronologies complement each other. The overall effect is aloof, distinctive, and elegant.

“Collected Visions” consists of photographs from talented local high school students. Accompanying each image is a statement of about 250 words from the photographer. Good with a camera, these young people are good at words too. Many display a fondness for the surreal (J. D. Greenfield’s juxtaposition of a clamp and a fried egg is a knockout), and they largely prefer black and white to color. They also have good taste in influences. Maureen Richards Scholarship winner Matt Granetz, for example, out-Jerry Uelsmanns Jerry Uelsmann.

The students are from Winchester High School, Malden High School, Wilmington High School, Boston Arts Academy, and Reading Memorial High School. As RMHS class of ’75, I am happy to note that 10 of the 16 photographers, including Granetz and Greenfield, are from Reading. Go, Rockets!

Mark Feeney can be reached at mfeeney@globe.com.