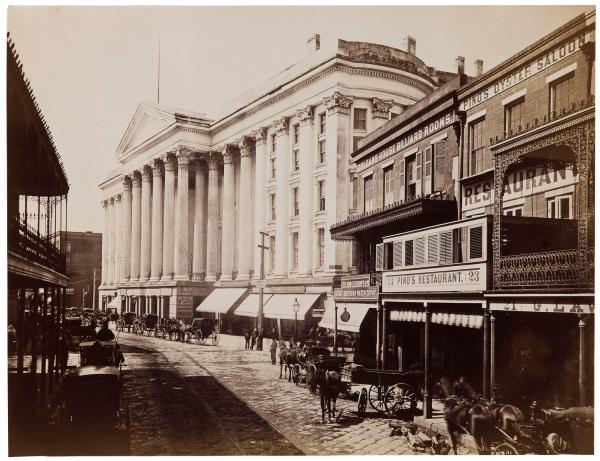 Credit NOMA
A photograph by Theodore Lilienthal of St. Charles Ave. in the middle of the 19th Century.

The New Orleans Museum of Art is offering a glimpse at a fraction of its collection of photographs. Of the 10,000 pictures, 132 are on display. 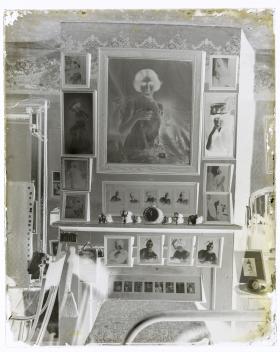 We spoke with curator Russell Lord about the exhibition — how NOMA built such an extensive collection, starting in the 1970s, and why. 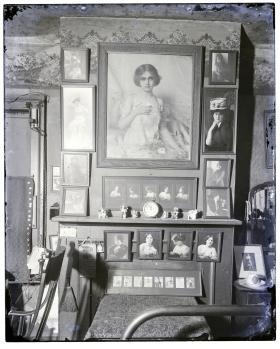 Enlarge image
Credit NOMA
The image from a negative by E.J. Bellocq.

“The museum made then the very prescient decision to begin collecting photography, and that was a time when not many other museums were looking at photography and they weren’t collecting it. They weren’t building permanent collections,” says Lord.

“So, as a result, the museum actually has very little competition for great things. And of course the other major factor is that photographs were remarkably inexpensive back then. You know, when you think about a museum like the New Orleans Museum of Art — at the time they realized they might not be able to compete with the Art Institute of Chicago or the Metropolitan Museum of Art in terms of building a collection of Impressionist paintings. But they realized that they could compete with any institution for photography, and as a result of that decision we now have one of the finest collections of photography — of art photography — in the United States.”

Lord says what makes a great photograph is a difficult question.

“The second criteria was the condition and the quality of the object itself. Photography is, as you know, a medium of multiples, so there are more than one of most of these things. But if other museums have another example of one of the pictures that you see here on the wall, it’s probably not as good as ours. The things that you see in this exhibition are the finest examples of whatever they are.

“The third criteria was each picture’s role in the history of photography. I very much wanted this exhibition to kind of mirror what I call the cultural ambitions of photography. And that is to say that photography has been a part of every aspect of modern life, from science photographs to forensic photography to ethnographic study to fashion images to advertising images. And each one of those factions is well represented in this exhibition.”

Lord says the history of photography is full of famous photographers coming to New Orleans.

“New Orleans has in a way played a very central role in the history of photography, and that made it very easy for me to include New Orleans in a prominent way in this exposition, in the form of photographs by photographers that most people know — but some will be surprised that they were here and that they photographed in the city.

Lord shows off an image he says is one of the earliest photographs of New Orleans. It’s by Theodore Lilienthal, a German immigrant who became a commercial photographer.

“In the mid-19th Century he was commissioned by the City of New Orleans (it was actually the first municipal photography commission in the United States) to make a survey of New Orleans,” Lord says. “You’re looking at the Charles Hotel. So this is on St. Charles Avenue just a couple of blocks off of Canal. The building is no longer there. Surrounding the hotel you see all of these wonderful buildings that we know as New Orleans architecture: the rod-iron balconies. But one of my favorite details is the sign advertising John Lazarus’ Great Southern Watch Depot. There’s a large oversized pocket watch hanging down from the sign, and because of the detail in this large glass negative we know — reading the clock — that the picture was made roughly at 10:02 in the morning. So it’s a wonderful kind of serendipitous detail, but a really beautiful slice of life in New Orleans in the middle of the 19th Century.

Lord then turns to another image, a photographic negative on glass.

“This is one of the photographic negatives that we have on display,” he says. “It’s a glass negative by the well-known New Orleans photographer E.J. Bellocq. He also made a series of pictures of the Storyville prostitutes. This one shows a mantle. It’s believed to be Bellocq’s own mantle. In it we see pictures of women in bathing suits and sort of posing somewhat coyly, but they’re far more chaste than the pictures of the Storyville prostitutes, so it seems to be a sort strange, in-between image. And we don’t know of any vintage prints that were made from this negative, so we decided to show the negative itself. And it is here beautifully displayed with a backlight so that you can really see the image in the negative.”

Visitors may be surprised to find not just black and white, but red, in these images.

“There are three color images,” Lord says. “I should say that the date range of the exhibition runs from 1843 to 1985. We made the decision to not include more contemporary things. We hope to continue building our contemporary collection. And I wanted to leave room for the possibility of a ‘Photography at NOMA Part 2’ five to 10 years [from now], once we’ve had a chance to build that collection.”