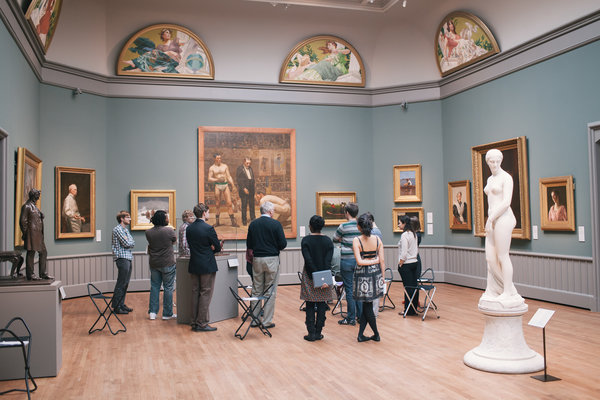 AT the Yale University Art Gallery, which fully reopened in December after a painstaking expansion that spanned 14 years and cost $135 million, a sunny new fourth-floor gallery was filled recently with a collection of artworks highly unlikely ever to meet in such proximity again.

In a conventional museum, it would be almost impossible to imagine them sharing a room to begin with: an ashen Anselm Kiefer painting from 2001, looking like a patch of scorched earth, on the same wall as an early Renaissance “Annunciation” in tempera; across the way, a thousand-year-old wooden figure from modern-day Sierra Leone and a collection of coins from India almost a thousand years older still; around the corner a deadpan 1966 Diane Arbus photograph of a Brooklyn family and, dominating the whole gallery, Ellen Gallagher’s eye-popping “DeLuxe,” a 60-piece contemporary print work that turns old advertisements into phantasmagoric riffs on race and representation.

What thread could possibly unite these works? Not a purely curatorial one, of course, but a thread that wends its way through the often wonderfully murky territory where art appreciation meets education. The room, the Levin Study Gallery, is given over to professors — from art history but also from African-American studies, South Asian studies, gender and sexuality studies, among others — who choose pieces from Yale’s vast collection to serve as teaching tools. The unorthodox space, open to the public as well as students, serves as a potent visual metaphor for what is happening throughout the institution, the nation’s oldest university art museum, and in a broader movement to embed campus art collections much more deeply into university curriculums.

Academically affiliated museums are often described as the jewels of their campuses. The term can carry the hidden implication that such collections, while treasures, are mere accessories, attached to universities but with no clear connection to their academic priorities.

That criticism, explored in a long-range study by the Andrew W. Mellon Foundation in the 1990s, burst into public view in 2009 when Brandeis University, in financial turmoil, briefly proposed selling its highly regarded Rose Art Museum collection. The fight over the Rose’s future exposed deep tensions between the university and the museum. “In our view,” a university committee later wrote to the administration and board of trustees, “the Rose, like many of its fellow university museums, has been oriented too much toward the art world and not enough toward the academy.”

via Newly Renovated Gallery Spaces at Yale Breach the Gap Between Academia and Art – NYTimes.com.