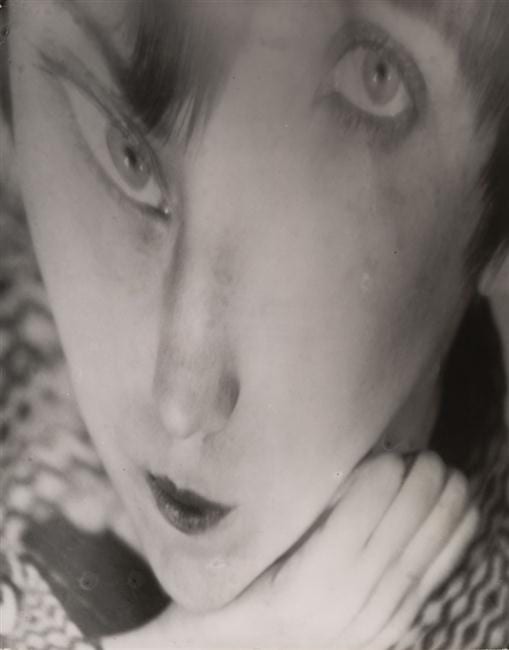 The Shaping of New Visions: Photography, Film, Photobook at MoMA through April 21, 2013

“New Visions” synthesizes 250 works of 90 artists spanning over a hundred years of practice, movements, and continents. The list of movements, “Dada, the Bauhaus, Surrealism, Constructivism, New Objectivity, Conceptual and post-Conceptual art” makes every photographic practice from Man Ray on fair game.This isn’t bad, but barring a more extensive set of on-the- wall gallery notes, it’s hard to see what connections we are to draw from work to work. What I suggest is first to take in the museum’s current prime offering, “Inventing Abstraction, 1910–1925.” Its thesis is that abstraction, as an artistic tool, swept the world and became a prevalent mode of artistic expression during the years 1910–1925. If you start with “Inventing Abstraction,” you can trace its permutations as you move through “New Visions.”

The show is organized, roughly, by chronology and ideology, and photography’s organic, straight mode is dissected into the various ways in which it has become a tool for large, multimedia, postmodern works. In the first gallery there are well known images: sharply focused, abstract nudes from Edward Weston and the optimistic, industrial observations of Sheeler (Criss-Crossed Conveyors, 1927 ) and Strand (From the Viaduct 125th Street, 1916). These are countered by Man Ray’s playful metamorphosing of negative/positive images, still and cinematic, to reveal the unconscious, erotic side of the classical nude, modeled by Kiki de Montparnasse (Le Retour à la Raison and Torso, 1923). Berenice Abbot makes an amusing, surprisingly avaunt-guard comment on this male dominated field with her fractured, cubist self Portrait of the Artist as a Young Woman (c. 1930). Make special note of the Rayographs,which suggest the x-ray like interior of things and psyches. In the next gallery, this dialect deconstructs the sunny American ethos and makes its way through Europe.

The German visions of the New Objectivity are featured next. August Sander illustrates a viable society of individuals who are now defined by type and profession. From his first exhibition, Face of Our Time, the Bricklayer’s Mate (1928) stares us down; he is master of his small domain, and seemingly content with his crushing load. Curator Roxana Marcoci reminds us that Sander’s work invites multiple, close readings by including The Right Eye of My Daughter Sigrid (1928), a little known work of his. Sigrid’s patient right eye watches us and the bricklayer impassively from the opposite wall. We are reminded that no matter how objective photography seems to be, viewing is always an interpretative activity. German Bauhaus practitioners László Moholy-Nagy and Albert Renger-Patzsch further adapt photographic practice to illustrate what an egalitarian society might be and, at the same time, begin to criticize ideologically driven progress for its demands for conformity and depersonalization. The multiple perspectives necessary to express these complicated visions require photograms, montage, and collage.