As Art Market Soars, So Do Questions of Oversight – NYTimes.com

As Art Values Rise, So Do Concerns About Market’s Oversight 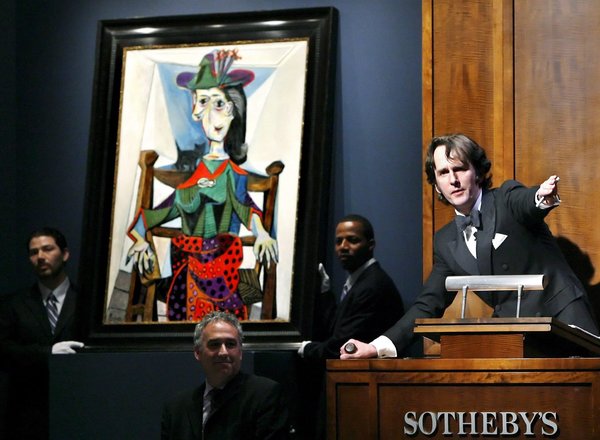 Tobias Meyer, a principal auctioneer at Sotheby’s, takes bids at a 2006 sale. Some say the art market needs closer monitoring.

By ROBIN POGREBIN and KEVIN FLYNN

When some of the world’s richest people gather for the glittering New York auction season this spring, they will spend hundreds of millions of dollars in an art market that allows opaque transactions and has few outside monitors.

At major auctions the first bids announced for a piece are typically fictional — numbers pulled from the air by the auctioneer to jump-start bidding.

Collectors can find themselves being bid up by someone who, in exchange for agreeing in advance to pay a set amount for a work, is promised a cut of anything that exceeds that price.

And year round, galleries ignore with impunity a 42-year-old law that says they must post their prices.

Art sales in New York, at galleries or at auction, are estimated at $8 billion a year. Yet the last significant change in the city’s auction regulations took effect more than two decades ago, when the value of transactions was less than half of what it is today.

Many in the art world insist there is no need for further scrutiny of a market that prompts few consumer complaints and is vital to the New York economy. But other veterans of the business say there is mounting concern that monitoring has not kept pace with the increasing treatment of art as a commodity.

“The art world feels like the private equity market of the ’80s and the hedge funds of the ’90s,” James R. Hedges IV, a New York collector and financier, said. “It’s got practically no oversight or regulation.”

For two decades some New York State lawmakers have been trying to curb the practice known as “chandelier bidding,” a bit of art-market theater in which auctioneers begin a sale by pretending to spot bids in the room. In reality the auctioneers are often pointing at nothing more than the light fixtures.

“The time has come to give up this fiction that there are actual real bidders,” said David Nash, a gallery owner who spent 35 years as a top executive with Sotheby’s.

But nine bills submitted in Albany over the years to ban the practice failed. So today, in a city that seeks to regulate soda consumption, chandelier bidding remains 100 percent legal. The law says auctioneers can announce such bids as long as they stop before reaching a sale item’s reserve price, the confidential minimum amount that sellers have agreed to accept.

REad MOre of the STory HEre:

As Art Market Soars, So Do Questions of Oversight – NYTimes.com.