Ansel Adams and the art of framing – latimes.com

Ansel Adams and the art of framing 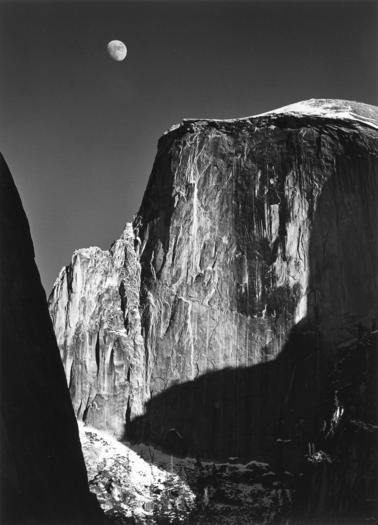 Over at Essay Daily (which calls itself “A Filter for and An Ongoing Conversation About Essays and Magazines About Writing”), John D’Agata offers a brief meditation on Ansel Adams — and the moment he understood that photographs were not taken so much as made.

The year was 1927, and Adams “hadn’t figured out yet how to make photography work, how to render with light and luck and dark the deep and powerful truths that he felt when in the mountains.” He was in Yosemite, shooting images of Half Dome, when, as an experiment, he decided to use “a heavy red filter that immediately darkens the sky, transforms it even darker than the cliff face itself, so that an abyss opens up on the left side of the cliff, as if the brooding shelf of Half Dome has torn straight through it like a cleaver made of light.”

This, D’Agata suggests, is the turning point: when Adams stopped merely being someone who shot pictures and became an artist, with all the intentionality it implies.

How did that work? Partly, it’s a matter of expression. As D’Agata notes, “this is the first time in Adams’ career that he has managed to make a mountain look like how it feels.” But even more, it has to do with framing, edging, even manipulating — with the intercession of the artist’s sensibility on the raw material he saw.

“Photography is really perception,” Adams once wrote. “As with all art, the objective of photography is not the duplication of visual reality, but an investigation of the outer world and its influence on the inner world.”

It’s no coincidence that D’Agata should be the one who zeroes in on this. The issues he raises in regard to Adams are the ones that motivate much of his work. His 2010 book “About a Mountain” conflates time “for dramatic effect,” while “The Lifespan of a Fact,” published two years later, goes a long step further in addressing the relationship of truth and invention, or interpretation in narrative nonfiction.

“I’m not calling this ‘nonfiction,’ ” D’Agata writes late in that book, “and neither do I tend to call anything that I write ‘nonfiction,’ because I don’t accept that term as a useful description of anything that I value in literature. The only reason this is being labeled ‘nonfiction’ by your editors is because that is one of the two binary categories that editors allow in prose.”

The same, it seems, is true of Adams, who, through the simple intercession of that red filter, begins to “[wrangle] the reality of the world around him into what he has needed it to be.”

It’s a message worth remembering: When it comes to making art, we are always engaged in a process of shaping, in which expression has to do with “something that is built up from within, rather than something extracted from without.”

via Ansel Adams and the art of framing – latimes.com.